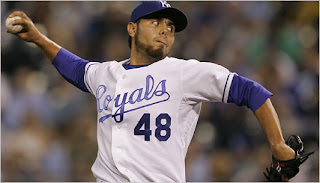 The Royals announced today that they have chosen not to exercise their $8 million option on closer Joakim Soria for the 2013 season, triggering a $750,000 buyout. Soria is now a free agent.

Both Soria and the Royals seemed optimistic that a deal would be reached in the past. Soria is only 28, however the right-handed closer missed all of the 2012 season after having Tommy John surgery on his right elbow in April. This was the second time in Soria’s career that he has been forced to undergo the procedure. Soria is already rehabbing his repaired elbow and has been throwing two to three times a week.

Despite declining Soria’s option, it is possible that Kansas City could still work out a deal to keep Soria. It has been reported that the Royals planned on declining the option while negotiating an incentive-laden contract with Soria.

Kansas City now faces a difficult decision in whether or not to keep Soria. He is coming off a severe injury, and the closer’s numbers declined in 2011 after his stellar 2010 season. However, Soria is a fan-favorite, and the market for closers is very weak this offseason. If the team wants to have a quality closer, there aren’t many better options out there than Soria. Another possible outcome is that the team may find Soria to be too pricey and choose to spend money on a starting pitcher or another bat. If the Royals went this route, they’d have to sign a cheap bullpen player to be the closer, or use someone currently on the team. It comes down to how much the Royals willing to spend.