How Does The Recent Conference Realignment Affect The Big 12? 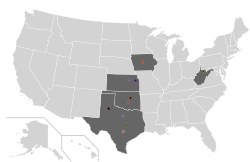 Just when it seemed like everything had settled down, conference realignment is happening again. Yesterday, the University of Maryland declared for the Big Ten, and Rutgers has now officially announced that they will also be joining the Big Ten – which now consists of 14 teams. These moves have made many Big 12 fans wonder if their league should also consider expansion, and if the Big 10’s expansion will once again threaten a Big 12 that barely survived the last round of conference realignment.

A lot of talk is surfacing that North Carolina and Virginia Tech may depart the ACC as well and join the SEC, which would kick-start the race towards super conferences and lead to the end of the ACC. While the Big 12 has a great new TV contract and ten teams, many feel that the league will have to add teams to keep up.

With the ACC’s existence in question, Florida State and Clemson have become the two most talked-about schools in regards to potential targets of the Big 12. Louisville, Cincinnati, BYU and Georgia Tech have also been mention as possibilities.

The biggest issue the Big 12 is facing is more is not necessarily better in terms of revenue. Many feel that the teams the Big 12 is targeting don’t bring much added value to the conference and media consultants have speculated that more teams and the return of a league championship game in football would not guarantee more revenue for the league.

The Big 12 will have to monitor the ACC’s current situation closely, as they will surely look to replace Maryland and Rutgers to help ensure the league’s survival. Should the Big 12 get proactive and try to poach teams to ensure its own survival, even if it comes at the expense of the ACC? That seems to be the difficult question the league will have to answer in the near future.