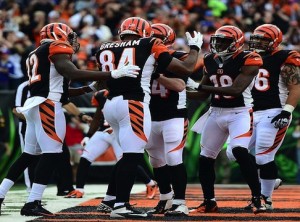 After losing to the Steelers in overtime, the Chiefs return home to host the Cincinnati Bengals (4-5), who are currently fighting for a playoff spot in a very even AFC. The game will begin at 12:00 p.m.

Kansas City had a great opportunity to knock off Pittsburgh last week, but several untimely penalties prevented the team from expanding an early lead. After making a brilliant throw to help the Chiefs force OT, quarterback Matt Cassel was picked off in the extra period which essentially ended the game. Turnovers have been the biggest reason why the Chiefs currently sit at 1-8. Jamaal Charles is quietly having another strong season, and Kansas City will need him to have a monster game to score points. The Chiefs receiving unit is very banged up, as Jonathan Baldwin is out with a concussion and leading receiver Dwayne Bowe has been limited by a hamstring injury.

Many Chiefs fans have speculated that Brady Quinn would get another shot at the starting quarterback role, but Matt Cassel has been officially named the starter for Sunday. Head coach Romeo Crennel has stated that Quinn is still recovering from his concussion and has not yet been cleared to play.

The Bengals are coming off their most impressive performance of the year, a 31-13 win over the defending champion New York Giants. Andy Dalton has become a solid NFL quarterback, and receiver A.J. Green has quickly become one of the league’s top wideouts. The Chiefs defense has not lived up to its preseason expectations, but it has the talent to keep the Bengals offense in check. Kansas City will likely need to force a few turnovers to slow down Dalton and Green and give its struggling offense a short field to work with.

The Chiefs proved last week that when they limit turnovers (Kansas City had zero during regulation) they can still compete with anyone. Still, it is hard to see this team repeating that type of performance two weeks in a row, especially with a banged up receiving unit. The Bengals are fighting for a playoff spot and have a lot of confidence, and also may be getting several good players back from injury. The Chiefs will likely need a few turnovers to pull this one out.