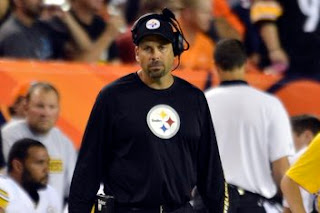 Monday night football seems like a really bad idea for the Kansas City Chiefs, who have been an absolute disaster this season and are currently tied for the worst record in the NFL. The entire country will get to watch the Chiefs take on a strong Pittsburgh Steelers team that hasn’t lost a Monday night home game in over 20 years.

The biggest storyline regarding Monday night’s game is former Chiefs coach Todd Haley facing off against his former team. Haley was fired during the season last year, despite leading the Chiefs to a division title the previous season and maintaining a decent product on the field despite a slew of devastating injuries. Chiefs fans now know the truth – Haley simply did not get along with Scott Pioli, who has quickly established a reputation as one of the worst general managers in professional football. Many fans wish Haley was still the head coach, as Romeo Crennel has looked absolutely clueless running the ship this season and has to shoulder a good portion of the blame for the team’s terrible first half of the season.

Matt Cassel will get the start at quarterback, and actually has played decently since returning to the starting role when Brady Quinn went down with an injury. The Chiefs lead the league with 29 turnovers, which has been the biggest factor in their historically bad season. Pittsburgh’s defense has played well recently, and the team will have to play mistake-free football in order to put enough points on the board to win.

The Steelers got off to a poor start this season, but have since rallied to win three in a row. Last week, the team defeated the reigning Superbowl champion New York Giants, and the offense seems to be clicking under Haley and veteran Ben Roethlisberger. Pittsburgh defeated Kansas City last season, 13-9.

The Steelers are banged up and missing a few key players and it is entirely possible that they will overlook the Chiefs a bit. Expect Kansas City to put up a better fight than most predict, but winning a Monday night game in Pittsburgh will require a near-perfect performance to pull off.