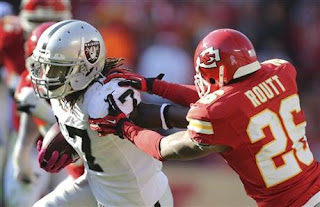 Gibbs has been the team’s linebacker coach since 2009, helping Chiefs like Derrick Johnson develop into pro bowl caliber players. He served as head coach for the University of Oklahoma from 1989-1994, and also coached as a defensive coordinator for LSU and Georgia. In the NFL, Gibbs served as the New Orleans Saints defensive coordinator from 2006-2008.

Crennel had drawn some criticism earlier in the season for his attempt to serve as both the team’s head coach and defensive coordinator. Many noted that he was being stretched too thin, especially considering his failure as a head coach for the Cleveland Browns several years ago. This move appears to be an attempt for Crennel to save face after the Chiefs disastrous first half of the season, but give the Chiefs’ head coach some credit for trying something new.

Crennel’s decision to step down as defensive coordinator wasn’t the only move Kansas City made yesterday. The team also announced it has released cornerback Stanford Routt, who the Chiefs had signed to a three year, $18 million contract this offseason. Routt was brought in to be a replacement for the departed Brandon Carr; however he has struggled all season long and has proven to be yet another disastrous signing by GM Scott Pioli. Javier Arenas will likely fill Routt’s starting cornerback spot.

Routt’s roster spot will be filled by Shaun Smith, who is rejoining the Chiefs due to depth problems on the defensive line. Glenn Dorsey’s injured calf may force him to miss several weeks, and the unit could use a player who knows the system. Smith played for the Chiefs in 2010 and had a pretty decent season (despite some interesting controversy) and he should help the team’s defensive line immediately.