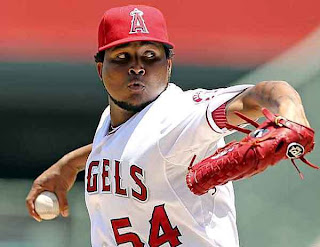 Just hours after announcing that the club had declined an option on closer Joakim Soria, the Royals announced another deal concerning a pitcher. Kansas City has made a trade with the Los Angeles Angels, acquiring right-handed pitcher Ervin Santana for minor league left-hander Brandon Sisk. The Royals also acquired $1 million in cash with the deal.

Santana has been a regular in the Angels’ rotation since 2005, going 96-80 with a 4.33 ERA. He has been extremely durable during this stretch, starting at least 23 games in eight consecutive seasons. The righty struggles last season, finishing with a 9-13 record with a 5.16 ERA while allowing a league-leading 39 home runs. Santana did pitch well in the final two months of the season, hopefully showing that he has put his struggles behind him and can pitch like he did earlier in his career.

Santana only has one year remaining on his contract, and it appears that the Royals have not discussed any long-term deals with him at this time. This might be a wait-and-see situation for Kansas City, mostly due to Santana’s inconsistency. The pitcher is a former all-star who once looked like one of the best in the game, yet really regressed in the early portion of the 2012 season.

Sisk spent last season in Triple-A Omaha, going 3-2 with a 2.54 ERA and also recording eight saves. The Angels didn’t have room for Santana in their starting rotation, and it is believed that Sisk may be an addition to their struggling bullpen.

It is hard to gauge this trade for the Royals. While the team does need some starting pitching, the acquisition of Jonathan Sanchez – who was downright horrible last season – is still on many Royals fans’ minds. However, the club has shown a knack for helping struggling pitchers find a second life in Kansas City, and Santana did pitch well at the end of last season. The Royals new acquisition has one year left on his contract to prove that he still has the stuff that once made him one of the better starters in the majors.