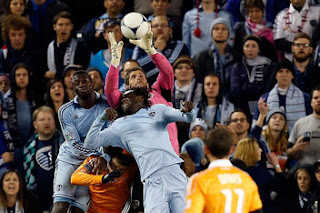 Sporting Kansas City’s season is over, as they split a pair of games with the Houston Dynamo yet fell 2-1 on aggregate. It is the second consecutive year that KC’s season has ended in the playoffs against Houston after winning the Eastern Conference regular season title.

The game will leave a bitter taste in the mouths of Kansas City fans, as Sporting was absolutely screwed late in the game on a no-call in the box. A sporting player got the ball in great position in the box, and was blatantly tripped by Houston’s Ricardo Clark in front of the goal. The ref swallowed his whistle, afraid to make the call late in the game. The end result was Sporting’s season coming to an end.

The non-call in the box is even more frustrating due to how badly Sporting dominated last night’s game. Kansas City outshoot Houston 20-3, including 13 shots inside the penalty area. KC also had a 5-0 edge on corner kicks, a 31-1 edge on open-play crosses and held 71% possession.

Due to their dominating play, Sporting had plenty of great chances to add to their lead, but simply couldn’t find a second goal. C.J. Sapong had a great opportunity to score when he beat Houston’s goalkeeper to the ball in the box, but his shot sailed over the crossbar. Minutes later, defender Matt Besler volleyed a bouncing ball in the box slightly over the goal. Midfielder Roger Espinoza found a couple of open looks from deep, but couldn’t deliver a dangerous shot.

The non-call in the box late will loom over this game for quite a while, but Sporting certainly had plenty of chances to tie the aggregate up. The team deserves a lot of credit for not only a brilliant regular season, but fighting back and playing lights-out when their backs were against the wall. Kansas City fans have one sports team they can take pride in this fall.