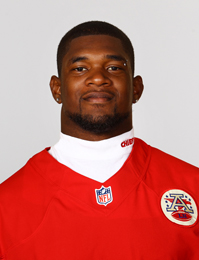 Reports are coming in that the unidentified Chiefs player who killed his girlfriend and then took his own life is Javon Belcher.

The first shooting occurred around 8:00 a.m. this morning, at 54th street and Chrysler Avenue. Police say that after Belcher fatally shot his girlfriend, he then drove to the Kansas City Chiefs' training facility where he took his own life. Belcher was 25 years old.

After Belcher drove to the Chiefs facility, several members of the team's staff tried to prevent him from committing any other violent acts. When police arrived at the scene, Belcher was standing in the parking lot holding a gun to his head. As police got out of their vehicles to talk to Belcher, he fired his gun on himself.

Belcher was in his fourth season with the Chiefs after playing his college ball at Maine. After seeing action in a few games his rookie year, Belcher earned a starting job next to Derrick Johnson in the Chiefs' 3-4 defense. In 2010 he recorded 84 tackles, and last season he recorded 87 tackles. He had 38 tackles while starting 10 of the Chiefs' 11 games this season.

The Chiefs will host the Carolina Panthers tomorrow at 12:00 p.m.

You guys seriously need a proofreader. This is terribly written; there are mistakes in almost every sentence.

From my family the Moore's: We deeply give you our condolences in this tragic event of the loss of a son, uncle, brother ,cousin & teammate. We will keep you all in prayer & wish 4 you all to some day heal from your pain..

I agree, it seem like they were trying to get this out so quickly that they didn't even proofread their own stuff. SMH

Yeah, tons of errors. Why don't you point one out? SMH!

Sorry for all involved friends and family from both sides may they both R.I.P

Actually, the article was incredibly well written, and our hats are off to KCMB for breaking this story first. The best news team in Kansas City, hands down.

Actually, your comment has more errors than the article (which has NONE), your use of the semicolon is incorrect, and CMOORE, you wrote "it seem" instead of "it seems" - both of you are idiots. Now go back in your holes.

I really don't think the way the article was written is the main thing people are interested in. Two people are dead, fairly certain their families and friends aren't going to notice faulty grammar.

There is no faulty grammar.