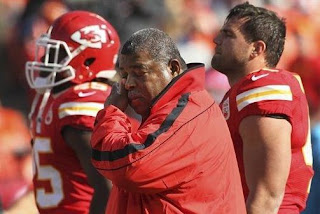 Despite playing with heavy hearts after the murder-suicide of Jovan Belcher, the Chiefs were able to win their second game of the season yesterday, defeating the Carolina Panthers 27-21 at Arrowhead Stadium.

The team had one of its best offensive games we’ve seen in quite some time, and a lot of the credit has to go to Brady Quinn. Quinn threw his first touchdown pass in nearly three years on the last play of the second quarter, and added another in the third quarter to give Kansas City a 24-14 lead. Quinn finished the game with an impressive stat line: 19 of 23 for 201 yards, two touchdowns and no interceptions. Kansas City’s banged-up offensive line did a good job protecting him as well, as Quinn was only sacked once on the day for a four yard loss.

Jamaal Charles also had another impressive game, carrying the ball 27 times for 127 yards. Not only were the Chiefs able to score points with their balanced attack, the long drives they sustained kept Carolina’s offense off of the field. Cam Newton and the Panthers had some success moving the ball, but Kansas City absolutely dominated time-of-possession, holding onto the football nearly 15 more minutes than Carolina.

The ball-control attack from the offense was crucial, because Kansas City struggled on defense. Newton had a good game running and passing, and the secondary had no answer for Steve Smith. To make matters worse, Brandon Flowers, Abram Elam and Derrick Johnson all left Sunday’s game with various leg injuries. The Chiefs’ offense will have to continue to protect the football and sustain long drives as a banged up defense struggles to get healthy and find some momentum.

Yesterday was an extremely difficult day for the fans, coaches and players, and all parties handled the situation admirably. Odds are the Chiefs will still end the season with the worst record in the league and many coaches and players will not be back next season, but that doesn’t change the fact that for one day, the organization bonded together to win a football game in the wake of a tragedy.