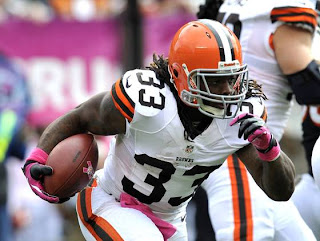 The Chiefs will look to build off the momentum of their emotional victory over the Panthers last week when they travel to Cleveland to face the Browns. Kansas City is looking for its third win of the season, while Cleveland will be trying to earn its fifth win. Kickoff is scheduled for 12:00 p.m.

The Chiefs have been the most discussed and dissected NFL franchise over the past week in the wake of the murder-suicide of Jovan Belcher. The focus on Belcher’s death has somewhat overshadowed the Chiefs previous game against Carolina, in which the team played its best football of the season. Most of that credit has to go to the offense, which controlled the clock by sustaining several long scoring drives which was the biggest reason the team won. Brady Quinn will be facing his old team, and he should have a good amount of confidence after playing well last week. Jamaal Charles already has topped the 1,000 yard mark for the season and is averaging 4.8 yards-per-carry, and he will continue to be the focus of Kansas City’s attack.

Cleveland's offense is anchored by two rookies – quarterback Brandon Weeden and running back Trent Richardson, and both have had up-and-down first seasons. Despite being banged up for most of the season, Richardson has already had 229 carries this season. The Browns seem adamant about giving their top-pick as many touches as they can every game, and he needs to be the focus of a Chiefs defense that has struggled lately. If the Chiefs can bottle up Richardson, they will force Weeden to make some plays, and the rookie QB has been prone to turnovers this season.

The Browns have won two straight, although those wins came over the Steelers without Ben Roethlisberger and the lowly Raiders. Still, this team has been competitive all year, and Weeden and Richardson have settled into their roles and aren’t playing like rookies anymore. If the Chiefs can stop Richardson and get an early score, they will force Weeden to make some plays with his arm and play from behind, which could result in Kansas City’s third win of the season.