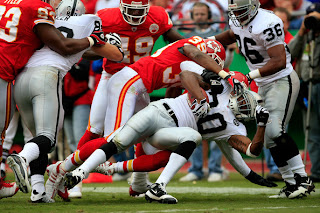 The Chiefs season has been about as bad as it could be, as the team is currently tied for the NFL’s worst record at 2-11. The good news for Kansas City is that its opponent, the Oakland Raiders, only has one more win than they do, and has looked almost as bad as the Chiefs this season. The official toilet bowl of the 2012 NFL season will take place this Sunday in Oakland, with kickoff at 3:25 p.m.

The Raiders relied on their passing attack in a 26-16 win earlier this season, and that will likely be the case again on Sunday. Carson Palmer has had a solid season for Oakland, throwing for 3,805 yards with 22 touchdowns and 14 interceptions, and with the Raiders struggles in the run game, the team will need Palmer to carry them. Darren McFadden has been banged up all season, but is expected to play on Sunday. The Raiders dynamic back ran for a season-high 114 yards in the first meeting between these two, and has found a lot of success against the Chiefs over the past couple of seasons.

If the Chiefs want to win this one, they will have to feed Jamaal Charles the ball early and often. The Raiders have one of the worst rush defenses in the NFL, and Charles is having a monster season for Kansas City. Charles was only given five carries in the Chiefs’ loss to Oakland back in October, a huge mistake by the coaching staff.

Despite having a record nearly as bad as the Chiefs’, the Raiders are a better team than the Chiefs and this game is being played in Oakland. If Charles can continue to rip off some huge runs and the defense forces Palmer to turn the ball over, the Chiefs could very well steal a victory. If not, Kansas City will be one step closer to having the first pick in the 2013 NFL draft.