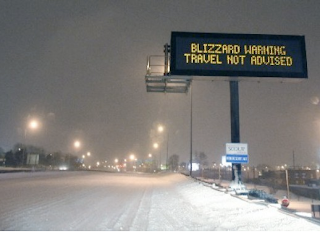 Kansas City has endured its first winter storm of the season, and many metro residents have spent the day battling slow traffic, closed roads and even power outages.

The roads around Kansas City were terrible all morning, as interstate traffic in most areas was 30 mph or less. Strong winds had blown the snow around on the roads, which has caused several accidents, most notably on I-29 near St. Joseph and the Kansas City International Airport. Most major roads in the KC area were not treated overnight, making  many morning commutes last hours.

Kansas City Power & Light has reported that 2,000 in the zip code of 64134 had lost power this morning, while 1,400 Blue Springs customers and 1,600 Lenexa customers also lost power. More scattered outages were also reported in Leavenworth and Olathe.