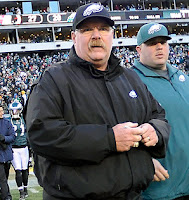 Yesterday, we compiled a list of possible coaching replacements for the Chiefs, and it appears that the team has begun to conduct interviews and move forward in the hiring process. Yesterday, the team interviewed former Philadelphia Eagles head coach Andy Reid.

Reid was not included on our previous article because it was widely believed that he was taking the vacant head coaching position with the Arizona Cardinals. Reid is still scheduled to interview with Arizona, but meeting with the Chiefs first may signal that the two parties’ interest in one another is strong.

Reid, who is 55, was the Eagles head coach for 14 seasons. In that time, Philadelphia won six division championships and made five NFC title games. Reid also guided the Eagles to a Super Bowl appearance, where the team lost by a field goal to the New England Patriots. Reid’s tenure in Philadelphia ended on a sour note, however, as the team failed to live up to lofty expectations in 2011 and had an awful 2012.

Would Reid be a good fit in Kansas City? He is an offensive-minded coach who has developed several Pro Bowl quarterbacks, which may be exactly what the team needs at the moment. However, the way the Eagles massively underachieved over the past two seasons has to be a giant red flag, and Reid will not have the talent at his disposal that enjoyed in Philadelphia for most of his time there.

In other coaching news, Falcons’ offensive coordinator Dirk Koetter has announced that he will be remaining with the Falcons. Koetter was rumored to be high on the Chiefs’ list. Kansas City apparently is interested in one of Koetter’s coworkers – Falcons special teams coach Keith Armstrong.

If the past couple of days are any indication, it looks like Clark Hunt is open to both former head coaches and top coordinators. It will be interesting to see which candidates the team brings in for an interview in the near future.