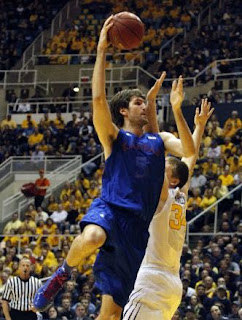 The Kansas Jayhawks’ new number one ranking was quickly put to test, as the team got all they wanted from West Virginia in Morgantown last night. Despite blowing a big early lead and some sloppy play, KU hung on to win 61-56. The Jayhawks now have a nation-leading 18 game winning streak, and sit alone in first place in the Big 12 with a 7-0 record.


Kansas was led by Jeff Withey, who had another big game on both ends of the floor. Withey finished with 15 points, 7 rebounds and 4 blocks, anchoring another stout defensive performance from the Jayhawks. Kansas has held its past six opponents to fewer than 60 points, which has been crucial due to the team’s lack of offensive production.


Early on, it looked like the Jayhawks were on their way to a blowout. KU built a 15 point lead, only to turn the ball over repeatedly and allow the Mountaineers to quickly get back into the game. Kansas had 16 turnovers in the game, and point guard Elijah Johnson once again struggled to put together a consistent performance.


The Jayhawks also struggled from the free throw line, hitting a dismal 18 of 34 attempts. The poor free throw shooting and turnovers wasted a solid shooting night from the floor, as KU hit 54% of the field goals they attempted.

Kansas will be back in action on Saturday, when they host Oklahoma State (13-5, 3-3). West Virginia’s next three games are against the teams that currently sit with the Mountaineers towards the bottom of the conference – Texas Tech, Texas and TCU. WVU will have to find a way to win all three if it wants to get back into the NCAA tournament discussion. The Mountaineers have never missed the big dance under head coach Bob Huggins.