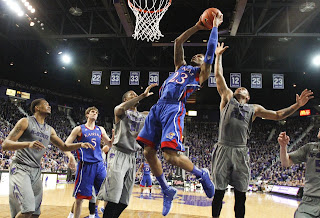 Kansas seized early control of the Big 12 conference race last night, edging Kansas State 59-55 in Manhattan. The Jayhawks have now won 16 straight games, and are still unbeaten in conference play. KU has won 45 of its last 48 games against KState, including a 23-2 mark in Bramlage Coliseum.

During the second half, it appeared that the Jayhawks were going to put the Wildcats away for good thanks to Ben McLemore. The redshirt freshman, who will be an early in pick in next year’s draft, scored five consecutive points to give Kansas a 10 point lead. However, KState got an answer from Shane Southwell, who hit consecutive three pointers to keep the Wildcats close. Southwell, who had a career high 19 points, also got KSU within three late, however KU closed the game out at the free throw line.

The 59 points were a season low for Kansas, and concerns about the team’s offense continue to grow. Kansas is averaging only 61 points per game in its last four contests, relying on its stout defense to grind out wins. While KU’s defense will keep them in every game, Bill Self will have to address the offense and try to get better play out of senior point guard Elijah Johnson, who has struggled mightily in conference play.

On paper, this is the toughest regular season game the Jayhawks had remaining, and the win now makes them heavy favorites to claim a ninth-straight Big 12 title. KU will face Oklahoma at home on Saturday, which should provide the team with another tough test. The Sooners are 4-1 in conference play this season, including impressive recent wins over Oklahoma State and Texas.

KState will have to regroup quickly, as they travel to Ames on Saturday to face Iowa State, who also only has one loss in conference play – which came in overtime in Lawrence against Kansas.