Kansas’ 85-80 loss to Oklahoma State on Saturday seemed shocking to many, given how dominant the Jayhawks have been at home for the last several years and Kansas’ high ranking in the polls. However, the Jayhawks had been asking to be upset for months, narrowly escaping several inferior teams before Saturday. The problem in Lawrence all starts at point guard, as Elijah Johnson continues to struggle for KU. 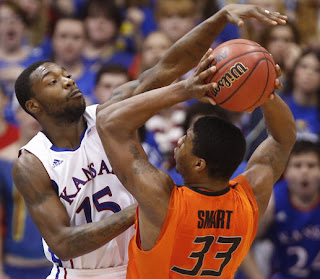 Johnson nearly single-handedly lost the game for Kansas on Saturday. The senior shot 3 of 14 from the floor and committed four costly turnovers in the second half that led to easy transition buckets for the Cowboys.  The Jayhawks had a four point lead late in the second half, and good point guard play would have allowed KU to put the game away. Instead, Johnson handed it to OSU on a silver platter.

Johnson has 19 turnovers against 19 assists in his last five games, while also shooting a poor percentage from the floor. After excelling as a shooting guard late last season next to Tyshawn Taylor, Johnson simply hasn’t looked comfortable playing the point this year.

The problem for Kansas is a lack of depth – Naadir Tharpe is the only other player capable of playing the point, and the young guard has struggled with consistency this season. Tharpe hit some big shots for KU on Saturday, but he is best used as a change-of-pace of the bench. A Tharpe-Johnson backcourt also presents problems for Bill Self, because it means he has to sit either Ben McLemore or Travis Releford, both who are playing at an extremely high level for Kansas.

Self has said that he will stick by Johnson, and really he doesn’t have any other choice. Kansas fans will continue to hope and pray the senior figures it out and plays at a higher level. The Jayhawks have all the pieces to win a ninth straight Big 12 title and make another deep NCAA tournament run. However, if Johnson continues to play poorly, KU could be in trouble.