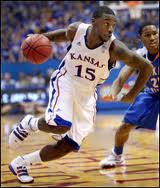 While it hasn’t always been pretty, the Kansas Jayhawks have made it to this point in the Big 12 season undefeated in conference play, and currently have a two game lead over several teams tied for second. KU will look to stay undefeated and increase their lead on Saturday, when the Jayhawks host the Oklahoma State Cowboys. The game is scheduled to begin at 3:00 p.m.


The Jayhawks’ struggles on offense lately have mostly been a result of sloppy guard play, particularly from senior point guard Elijah Johnson. Johnson has been prone to turnovers, and is struggling to score from both beyond the arc and in the lane. Ben McLemore has quickly turned into Kansas’ best offensive weapon, and Jeff Withey and Travis Releford are both efficiently scoring as well. If Johnson can return to the form he displayed in the latter portion of last season, Kansas’ offense will greatly improve.


Oklahoma State is one of the most talented teams in the league, and many pegged them as the second-best team behind Kansas before the season started. OSU is 4-3 in Big 12 play, however all three losses have come on the road to good teams – Kansas State, Oklahoma and Baylor. The Cowboys narrowly beat Iowa State at home on Wednesday, thanks to Marcus Smart’s layup with only seconds left on the clock. If Oklahoma State can defeat Kansas in Lawrence, they will take a huge step towards locking up an NCAA tournament berth and will be officially part of the Big 12’s upper tier of teams.

Kansas has won 102 of its last 103 home games; however Oklahoma State provides a huge challenge. If Kansas can finally get its offense to wake up, they shouldn’t have much trouble handling the Cowboys. However, if KU continues to shoot poorly from three and turns the ball over, Oklahoma State has the talent to pull the upset.