For only the second time this season, the Kansas Jayhawks will be looking to rebound from a loss. TCU may provide the perfect opportunity for KU to right the ship, as the Horned Frogs are winless in conference play. Tonight’s game will begin at 8:00 p.m. 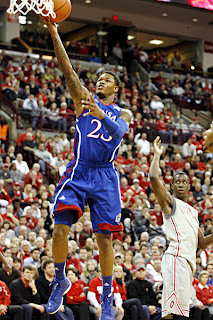 Kansas has struggled offensively over the past month, and the poor play finally caught up to them on Saturday. Against Oklahoma State, the Jayhawks shot only 41 percent and committed 16 turnovers. Much of the focus has been on Elijah Johnson’s struggles, and rightfully so – the senior has 19 turnovers in KU’s past five games while shooting a dismal 24 percent from the floor.


Self has said that he will stick with Johnson at point guard, and KU fans have to remain optimistic that the senior point guard will regain the form he displayed in last year’s NCAA championship game run. While Johnson figures things out, the Jayhawks will continue to rely on freshman sensation Ben McLemore for scoring. McLemore is now averaging 16.4 ppg and has become a consistent force for Kansas, while Jeff Withey and Travis Releford have also been consistent.


TCU has struggled to adjust to the Big 12, and hasn’t been very competitive in league play this season. The Horned Frogs are averaging only 49 points and shooting 35 percent in league play, and shot only 33 percent from the floor while getting blown out on Saturday at Texas. Despite Kansas’ offensive struggles, the Jayhawks still boast one of the top defenses in the country. If the Horned Frogs want to keep this one close, they’ll need some early shots to fall.


This game on paper has all the makings of a blowout, but Kansas has played down against inferior opponents several times this season already. Still, the Jayhawks are too talented for TCU, and Kansas should be able to get rid of the bad taste in their mouth from Saturday’s loss fairly quickly.