Royals spring training is officially underway! The team has made several key offseason moves in hopes for contending for the playoffs, and several position battles are taking place that could have a big impact on the upcoming season. 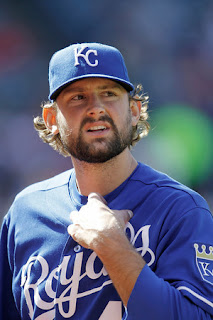 Currently, all eyes are on the pitching rotation, as a battle for the fifth starter’s spot has developed. It appears that Luke Hochevar is an early favorite to land the position, but he will have stiff competition from Bruce Chen and Luis Mendoza. Hochevar has the most upside of the group, and manager Ned Yost is still high on the former top overall pick. However, Chen and Mendoza both had solid seasons in 2012, and while Hochevar occasionally flashes brilliance, he had an ERA north of five last year.


Kansas City has high hopes for its rotation, as the additions of James Shields, Wade Davis and Ervin Santana should provide a much-needed improvement. Royals starting pitchers went 47-69 last season with a 5.01 ERA – good for 26th in the majors. The three new additions will be paired with Jeremy Guthrie, who pitched incredibly well for Kansas City at the end of last season.


If Hochevar wins the fifth starter spot, Chen and Mendoza could be added to the bullpen, which already has several talented pitchers. Mendoza was recently named the MVP of the Caribbean Series while he pitched for Mexico, and Chen has been steady for the entirety of his career in Kansas City. If the Royals ever needed a spot-starter, or if a starter suffered an injury, Mendoza and Chen would both be worthy candidates.


Danny Duffy and Felipe Paulino are both recovering from elbow injuries, but the pair could be back sometime around the All-Star break. Duffy and Paulino were starters before getting hurt, and both have pitched well in that role for the Royals.