The Big 12 tournament is officially underway at the Sprint Center in Kansas City. The quarterfinal round took place yesterday, featuring some close finishes and plenty of controversy. 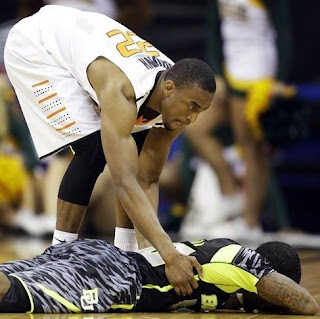 Kansas 91   Texas Tech 63
The biggest blowout of the day came from the biggest mismatch of the day. Kansas shot a Big 12 record 66 percent from the field, torching Tech for 57 second half points. Ben McLemore scored 24 points for the Jayhawks, while Dejan Kravic led the Red Raiders with 20 points. This will be the final game of the season for Texas Tech, which will need to make a decision this offseason on whether or not to retain interim coach Chris Walker, who replaced Billy Gillispie when he resigned due to health reasons.


Iowa State 73   Oklahoma 66
This game had plenty of intrigue as both Oklahoma and Iowa State are fighting for an NCAA tournament berth. The Sooners built an eight point halftime lead and led for most of the game, only to watch the Cyclones go on a 12-point run in the second half to come back. Iowa State got a monster game from Melvin Ejim, who had 23 points and 12 rebounds. Both OU and ISU should make the NCAA tournament, as the Cyclones picked up another impressive win and the Sooners have a strong body-of-work from both their non-conference schedule and fourth place finish in the league.


Kansas State 66   Texas 49
Kansas State star Rodney McGruder had a huge game for the Wildcats, scoring 24 points and adding seven rebounds. The Wildcats held the Longhorns at arm’s length throughout the game and limited Myck Kabongo to only two points. Texas, which finished the year with a 16-17 record, will miss the NCAA tournament for the first time in 15 years.


Oklahoma State 74   Baylor 72
This was the game of the day. The Cowboys took control early and held a 42-24 halftime lead, only to watch Baylor mount a furious rally in the second half. Baylor’s Gary Franklin was able to convert a four-point play late to tie the game up. On the next possession, OSU’s Phil Forte got the ball in lane and was fouled by BU’s Deuce Bello on what appeared to be a clean block. Forte made both free throws, but Baylor still had a final shot. Pierre Jackson – who had 31 points – got a decent look from three, but his attempt hit the back iron. The loss puts Baylor’s NCAA tournament chances in serious jeopardy.


The semi-finals of the tournament will take place today. Kansas faces Iowa State at 6:30 p.m. and Kansas State faces Oklahoma State at 9:00 p.m.