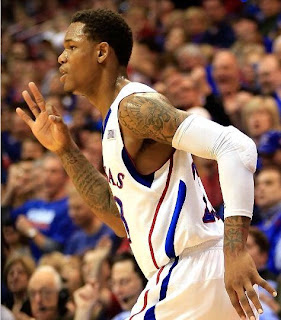 Kansas was led by Ben McLemore, who broke out of his recent slump in a big way. The redshirt freshman scored a Kansas freshman record 36 points against the Mountaineers, shooting 12 of 15 from the floor, including five of six from three. Jeff Withey also had a big game for KU, as the senior center nearly notched his second triple double of the season. Withey ended up with 14 points, 10 rebounds and nine blocks, and Elijah Johnson added 12 points and 10 assists for Kansas.


After a rare three game losing streak, Kansas has picked up two tough road wins and blown out every team it has faced at home. A lot of that has to do with Johnson, who has found his shooting stroke and has limited turnovers. If Johnson has another hot March, the Jayhawks could be primed for another deep run in the NCAA tournament.


The Jayhawks could be primed for another big performance tonight, as they host Texas Tech on senior night. Kansas fans will be seeing Johnson, Withey, Kevin Young and Travis Releford for the final time in Allen Fieldhouse, and this is likely McLemore’s last home game as a Jayhawk as well. The Red Raiders won their last game - beating TCU on Saturday – yet it was only Tech’s third league win this season. TTU has been blown out by nearly every decent team it has faced recently, and it doesn’t appear that they can pose much of a threat to Kansas – especially in Lawrence on senior night.


If the Jayhawks can get past the Red Raiders tonight, they will play at Baylor with the Big 12 title on the line on Saturday.