As usual, the Kansas Jayhawks are the only Big 12 team left in the NCAA tournament. KU overcame a poor first half on Sunday to eventually take down UNC 70-58. The win advances the Jayhawks to the Sweet 16 for the third consecutive year. 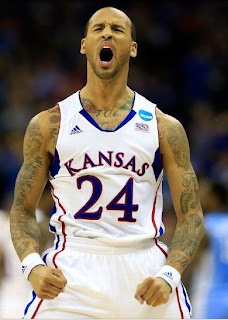 The first half couldn’t have gone worse for Kansas, as the team continued the sluggish play it showcased in its narrow round one victory over Western Kentucky. The Jayhawks constantly turned the ball over and failed to make several layups. Some timely baskets by Travis Releford and solid defense kept Kansas in the game, and the Jayhawks entered the break down by nine.


The second half was a completely different story for KU, as the Jayhawks ultimately outscored the Tar Heels 49-28 in the period. Kansas finally hit some threes, and Jeff Withey dominated the paint on both ends of the floor. Withey finished with 16 points, 16 rebounds and five blocks, while Releford added 22 points and 8 rebounds in his last college game in his hometown of Kansas City. Naadir Tharpe also finally woke up for the Jayhawks, burying a couple of threes in the second half to help KU secure the victory.


Withey has emerged as a consistent force for Kansas, but Releford may be the biggest X-factor on the team. The fifth-year senior is one of the best perimeter defenders in the country and also an efficient scorer. Often as Releford goes, so does Kansas – the Jayhawks are 26-0 this year when he scores at least nine points and 4-5 when he doesn’t. Given Elijah Johnson and Ben McLemore’s inconsistent play, the Jayhawks will need Releford to continue to produce if they want to make a second-consecutive Final Four.


Up next for Kansas are the Michigan Wolverines. The Jayhawks will play at 6:37 p.m. this Friday in Cowboys Stadium in Arlington, Texas.