The Kansas Jayhawks overcame some sluggish play in the first two rounds of the NCAA Tournament to once again make the Sweet 16 – the fifth time in the last six years the program has made it this far. If the top-seeded Jayhawks want to make a second consecutive Final Four, they will first have to get past the fourth-seeded Michigan Wolverines. 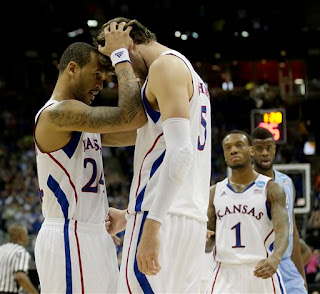 Michigan may be young, but the team is loaded with talent. The Wolverines are led by sophomore point guard Trey Burke, who averages nearly 19 points and seven assists per game. Michigan also gets a lot of scoring from Tim Hardaway, Jr., who averages 15 ppg. Michigan relies heavily on shooting threes for their success, with Hardway and Nik Stauskas both shooting over 40% from beyond the arc.


Kansas’ offense has been extremely unpredictable this season, but one consistent the Jayhawks have had is an outstanding defense. Anchored by the nation’s best shot-blocker in Jeff Withey and one of the best perimeter defenders in Travis Releford, KU has one of the top-rated defenses in the nation.


On offense, the Jayhawks will have to find a way to get Ben McLemore going. The redshirt freshman is predicted by most to be the top pick in the 2013 NBA draft and leads Kansas in scoring; however, he has been a no-show in March so far. McLemore went 0-9 from the field against North Carolina and scored only two points. He has eclipsed the 30 point mark several times this season, and may be due for a breakout game against Michigan’s suspect defense.


Tonight’s game will be a true clash of styles, as Michigan has a great offense while Kansas has a great defense. With Withey in the paint, Michigan will likely rely heavily on three point shooting. If the Wolverines aren’t on fire from beyond the arc, and the Jayhawks can counter with some threes of their own, KU could find itself closer to another Final Four.