The 2013 NCAA tournament is officially underway, and all three local Kansas City schools found themselves in the field of 68. One team is already out however, as Missouri lost to Colorado State yesterday. Kansas and Kansas State will play today. 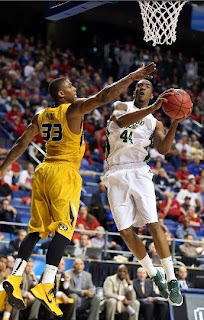 (8)Colorado State 84   (9)Missouri 72
Colorado State jumped out to an early lead and held Missouri at arm’s length the rest of the way. Kansas native Dorian Green scored 26 points for the Rams, who won their first NCAA tournament game since 1988. The Tigers were led by Phil Pressey’s 20 points, while Alex Oriakhi added 16 points and Jabari Brown contributed 14.


It has been a frustrating last two years for Tiger fans. After a strong regular season last year, Missouri lost as a two seed in the first round of the 2012 NCAA Tournament in one of the biggest tournament upsets of all time. This year, the team played well below expectations. Head coach Frank Haith showed early promise, but Tiger fans have to be disappointed in the team’s consecutive first-round tournament exits and poor 2013 regular season.


(1)Kansas   (16)Western Kentucky – 8:50 p.m.
NCAA tournament fans will recognize the Hilltopers, who have been a regular in the field over the past several years and have sprung a few upsets. WKU won four games in four days to win the Sun Belt tournament title and earn an automatic bid into the tournament.


A one seed has never lost to a 16 seed, and the Jayhawks should take care of business if they focus and avoid looking ahead to a possible second round matchup with Roy Williams and North Carolina. KU won the Big 12tournament with ease, and could be primed for another deep tournament run.


(4)Kansas State   (13)La Salle – 2:10 p.m.
The Kansas State Wildcats have avoided being upset all season, and they hope to continue that trend this afternoon. La Salle is a dangerous team, capable of hitting threes or getting to the rim. This is a game K-State should win, but don’t be surprised if the Explorers give the Wildcats all they can handle.


If KSU advances, they will play the winner of (5)Wisconsin vs. (12) Ole Miss with a rematch against top seeded Gonzaga possibly waiting for them in the Sweet 16.