The Royals’ preseason has gotten off to a great start, as the team is the only club in baseball to still be undefeated in exhibition play. Kansas City’s offense has been hot all spring, and that continued yesterday in an 8-2 win over the Oakland Athletics. 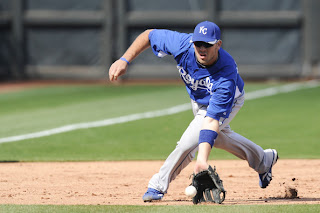 Royals fans have to be encouraged from how well the team has hit so far in spring ball. Third baseman Mike Moustakas currently has a .545 batting average, while first baseman Eric Hosmer is hitting .391. Kansas City needs both Moustakas and Hosmer to take the next step this season if the team is going to compete for the postseason, and both are producing so far. Alex Gordon may also be in-line for another good season, as he has hit .471 through exhibition play.


A battle for the fifth starter spot is still taking place between Luke Hochevar and Bruce Chen, and it appears that the Royals are now considering trading the pitcher that doesn’t make the starting rotation (as long as the team’s other starters remain healthy). Both Chen and Hochevar will earn $4.5 million this season, and with the Royals’ payroll at a franchise-record $79 million at the moment, it would make sense to trade whichever pitcher will not be starting.


Several scouts were in attendance for the team’s victory over the A’s to watch both Chen and Hochevar pitch. Chen allowed one run on two hits with zero walks, while Hochevar pitched three scoreless innings with three hits and one walk. Chen has led the team in victories over the past three years, but many feel that Hochevar is the current favorite to win the rotation spot.


Kansas City’s undefeated record in spring ball will be put to the test this afternoon, when the team plays the Arizona Diamondbacks. The game will begin at 1:10 p.m.