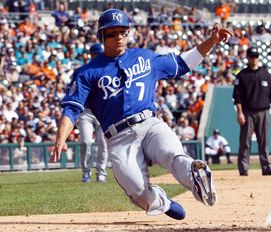 The release of Lough comes as a surprise, as the 27-year-old has put together an impressive spring. Lough is 20 for 44 in 24 spring games, and many felt he could be a replacement for the struggling Jeff Francoeur. The team currently plans on having four outfielders on its major league roster: Francoeur, Alex Gordon, Lorenzo Cain and Jarrod Dyson.


Many Kansas City fans have voiced their displeasure with Francoeur, who struggled from the plate last season and has had a poor spring. If the veteran gets off to another slow start this season, Lough could be brought up to replace him. Lough also provides some nice insurance should one of the team’s other infielders suffer an injury.


The decision to release Nady and Sherrill rather than assigning them to the minor leagues makes both veterans free agents, however Kansas City is expected to attempt to re-sign the pair. Sherill is recovering from Tommy John surgery and has yet to pitch this spring. The Royals are hopeful that he could return to game action sometime in May. Nady has battled a foot injury this spring, and saw limited action in 13 games.


The win over the Dodgers gave the Royals a club-record 22nd spring win. Kansas City has been impressive all of spring training, compiling a 22-6-1 record fueled by strong hitting from several young players and impressive pitching from its off-season acquisitions. The team will face the Seattle Mariners at 3:05 p.m. today. Bruce Chen will get the start for Kansas City – his last chance to impress the coaching staff in his battle for the fifth starter spot with Luis Mendoza. Mendoza will be starting for Kansas City on Wednesday.