Just minutes ago the Kansas City Chiefs signed cornerback Sean Smith to a 3 year deal for $18 million, with $11 million guaranteed. Smith was highly sought after in the free agent market even though he only has 5 TOTAL interceptions in his ENTIRE career. The Kansas City Chiefs have shown once again today that they are going to be very aggressive in the acquisition of free agents, as they are most likely going to look for an offensive lineman in the 2013 NFL Draft. 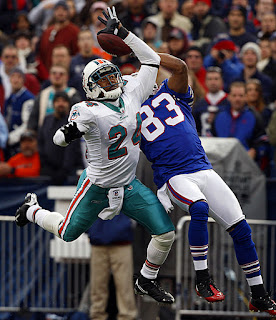 Sean Smith played cornerback for The University of Utah and was drafted in 2009 by the Miami Dolphins where he had an average career. He had an excellent performance in the 2009 Sugar Bowl vs the Alabama Crimson Tide where he made 6 tackles, 1 sack, 1 forced fumble and a game changing knock down which may have influenced his position in the draft. Sean Smith elected to skip his senior year in college to enter the 2009 NFL Draft where he was selected late in the second round by Miami.

This move could have possibly been a reaction to the free agency movement of the Denver Broncos, who signed an amazing deal with star wide receiver and the last great white hope at his position Wes Welker this week. With Peyton Manning throwing the ball to Wes Welker, every team in the AFC West had better stock up at the cornerback and safety positions.

NFL experts have been impressed with The Kansas City Chiefs free agency moves thus far, and most say that the Chiefs got Sean Smith for a great price, one that was much lower than he was hoping for at the beginning of free agency. Sean Smith is a large cornerback who could develop into an elite player. He is almost a sure start opposite cornerback Brandon Flowers. Smith can also play wide receiver and return kickoffs.