Donnie Avery, wide receiver, was signed by The Kansas City Chiefs today. Avery was drafted by The St. Louis Rams in the 2008 NFL Draft as the 33rd overall pick. Donnie Avery was a wide receiver for the University of Houston until joining the NFL where he enjoyed two good seasons as a Ram, catching 100 balls for 1263 yards and 8 touchdowns. Avery was sidelined in 2010 with an ACL injury and then dealt to the Titans where he was healthy enough to play in 8 games. 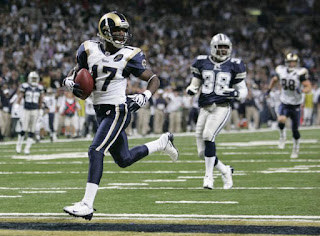 Donnie Avery, super star wide receiver in Indianapolis
The next chapter in the Donnie Avery story proved to be a great one as he was a stand out receiver opposite Reggie Wayne hauling in 60 receptions for 781 yards and 3 scores.

With the Chiefs, Avery will be competing for the number 2 slot with Jonathan Baldwin, Kansas City's 1st round pick from 2011 who has yet to shine on the field.

The Chiefs are really being aggressive in free agency. Any why not? There are slim pickins' in the draft this year, so signing Donnie Avery makes a lot of sense rather than taking a chance on an unproven rookie.