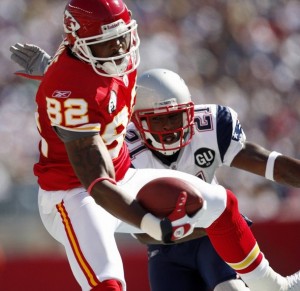 The Chiefs and Dwayne Bowe had until 3:00 p.m. yesterday to reach a long-term contract agreement, and both sides were unable to strike a deal. That now means that Bowe will now have to agree to play the 2012 season with a one year deal worth $9.5 million.

Bowe has officially been holding out since Kansas City slapped the franchise tag on him in March, and he has refused to sign the one-year tender the Chiefs have offered, holding out for a long-term deal with more money guaranteed. Bowe has been the Chiefs leading receiver over the past two seasons, and made the pro bowl after his stellar 2010 campaign. He reportedly was looking for a contract similar to the one Vincent Jackson received from the Tampa Bay Buccaneers – $55 million over 5 years – although it was highly unlikely from the start that the Chiefs would commit to that amount of money.

It is hard to predict the outcome of this situation, as many are unsure of how badly the Chiefs want to sign Bowe to a long-term contract. Bowe has had his ups and downs, but there is no denying his productivity recently, despite some inconsistent play from his quarterbacks. However, the Chiefs will have a lot of players to resign in 2013 when the contracts of Branden Albert, Jovan Belcher, Glenn Dorsey, Brandon Siler and Dustin Colquitt are all up, which means Kansas City might want to have some cap flexibility. Also keep in mind that the Chiefs selected Jonathan Baldwin in the first round last year, and have beefed up their WR depth over the last two offseasons.

In the meantime, the ball is in Bowe’s court. He can sign for one season and negotiate with the Chiefs later, or he can continue to hold out and opt not to play this year. No matter where you stand on Bowe and what he deserves, one thing is certain – Kansas City is a much better football team with him on the field.