World Cup's Final Game Fails To Live Up To Hype 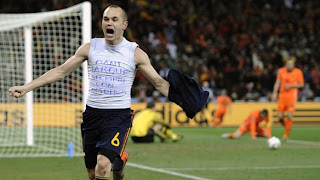 After a tournament filled with questionable officiating, world superpowers flaming out in the first round and the US surpassing yet failing to reach expectations, the world cup final failed to build on the momentum the tournament had built. While Spain won on a breathtaking extra-time goal from Andres Iniesta, the final game as a whole was marred by penalties and failed chances.

After fast-paced and thrilling matches in the tournament’s knock-out stage, the World Cup’s final game featured a Dutch squad who seemed intent on destroying soccer’s reputation of “the beautiful game.” Rough fouls, kicking players on the ground, and constant crying to the referee were as much of the game’s final highlights as Iniesta’s volley to win the world’s biggest sporting event. Countless missed chances by both sides to score on breakaways and gift headers combined with the penalties made for a rather forgettable game, despite the heroics at the end.

With momentum gaining throughout the tournament in terms of ratings, crowds and overall interest, it would be a shame for the tournament’s biggest game to turn off some of the new fans it has won. Hopefully for the sport, Iniesta’s final goal will be talked about more than the game and tournament’s dark moments.