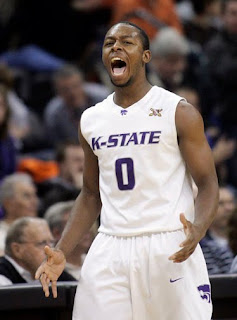 Jacob Pullen was named the Preseason Big 12 Player of the Year today following a season in which he scored nearly 20 points per game and K-State to the brink of a final four berth. Pullen's wildcats are predicted to win the Big 12 next season, and the senior guard will have to duplicate his stellar 2009 season to get them there.

Ricardo Ratliffe of Missouri was named the Big 12 Newcommer of the Year, while KU's Josh Selby was named Freshman of the Year. Selby was the nation's top recruit, and joins a talented KU team that should reload quickly after losing Sherron Collins, Cole Aldrich and Xavier Henry to the NBA. The Jayhawks were picked to finish second in the Big 12 behind K-State, despite winning six strait league championships. Marcus Morris, who was named preseason Big 12 First-Team All Conference, will be another big component for KU. Bill Self owns the Big 12, and Selby could be part of another banner-hanging season for the Jayhawks.

LaceDarius Dunn of Baylor was also named to preseason first-conference team, although his recent suspension could force the guard to miss some time. Without Dunn, Baylor goes from a Final 4 darkhorse to a fringe top 25 team.
at 11:39 AM No comments: