Chiefs Blown Out By Bills, Start Season 0-2 Once Again 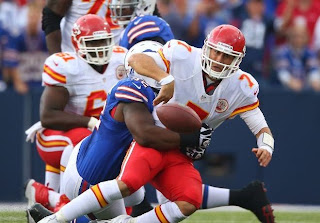 The Kansas City Chiefs were no match for the Buffalo Bills yesterday, getting blown out on the road, 35-17. The loss means that the team has a 0-2 record for the sixth time in the last seven years.

The final score makes the game seem closer than it actually was – Kansas City scored 14 points in the fourth quarter when the Bills had already put the game away and inserted their backups into the game (most notably former Chief Tyler Thigpen at quarterback). The team trailed 21-0 at halftime and 35-3 at the end of the third quarter. The Chiefs had several opportunities to get back into the game throughout, but costly mistakes and a failure to execute limited the team to three points. The most painful of these blown opportunities came late in the first half, when Peyton Hillis fumbled at the goal line and the ball was recovered by Buffalo.

It was expected that the Chiefs’ defense would get a significant boost with the return of Tamba Hali and Brandon Flowers, but that wasn’t the case on Sunday. Buffalo’s C.J. Spiller ran all over the Chiefs’ defense for 123 yards and two touchdowns, and Ryan Fitzpatrick threw for two scores in an efficient outing. Even Kansas City’s special teams let them down, as Buffalo’s Leodis McKelvin returned a punt 88 yards for a touchdown late in the third quarter.

The Chiefs’ offense was just as bad, putting together one of the ugliest first halves the team has seen in quite some time. The team gained only 71 yards on its first five possessions, looking overmatched by a Bills defense that had gotten dominated by a poor New York Jets offense last week. Things were so bad that Spiller nearly out-gained the entire Kansas City offense by himself in the first half. Matt Cassel ended up throwing for 301 yards and two touchdowns to Dwayne Bowe, but most of his production came late in the game when things were already decided. Cassel’s play in the first half was borderline terrible, and he has yet to show any consistency this season.

The bottom line is that once again, the Chiefs were not ready to start a regular season. For two straight years, the team has had a terrible preseason followed by two blow-out losses in weeks one and two, proving that Kansas City simply is not ready to play. The Chiefs have a very difficult schedule, facing the Saints, Chargers and Ravens in their next three games. An 0-5 record is a distinct possibility after the first two weeks.