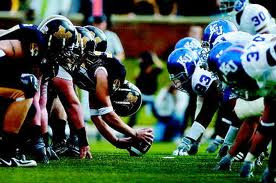 KU vs. MU at Arrowhead - Border War
Tickets for the fourth annual Border War are now open to the public. The tickets became available yesterday morning at around 10 a.m., with many KU and MU fans gobbling up tickets as soon as they became available.
The game will be fourth installment of the series to be played at Arrowhead Stadium. After being met with criticism and skepticism from both KU and MU fans and officials, the rivalry game has been a huge success. All three games have been nail-biters decided in the final seconds, and the revenue and turnout for all three contests has exceeded expectations.
Fans can purchase tickets to the KU / MU Border War at Arrowhead Stadium by visiting any Ticketmaster outlet, online at www.ticketmaster.com/bordershowdown or by calling Ticketmaster at 800-745-3000. Tickets are also available for purchase through Missouri by calling 800-228-7297 or Kansas at 800-344-2957.