Just days after placing the franchise tag on left tackle Branden Albert, the Chiefs have released right tackle Eric Winston.  The release may signal that the team is heavily leaning towards drafting a tackle with their first overall pick in the 2013 NFL draft. 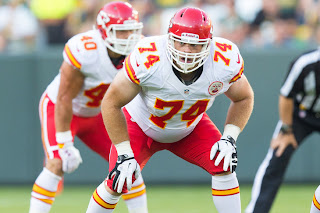 Winston had signed a four-year, $22 million contract with Kansas City a year ago, and this move saves the Chiefs $5.5 million in cash and $3.5 million in cap space. Winston, who was originally selected by the Houston Texans in the third round of the 2006 NFL draft, became one of the better right tackles in the league before the Chiefs made a move for him in last year’s free agency period. Winston had a decent season for Kansas City, but the Chiefs are looking to get younger, and Winston may not be a strong fit for new head coach Andy Reid’s man-on-man blocking system after spending his career in a zone scheme.


Winston became famous in Kansas City for criticizing Chiefs fans for cheering when quarterback Matt Cassel got injured in a game last season. Winston told the media he understood Kansas City’s decision, and was appreciative that they released him quickly so he could catch on with another team.


In response to his release, Winston called the move “philosophical” and also suggested that the team will likely draft an offensive lineman with its top overall pick. Most draft experts believe that Texas A&M’s Luke Joeckel or Central Michigan’s Eric Fisher could be likely targets for Kansas City.


One issue the Chiefs may face if they draft Joeckel or Fisher is dealing with Albert, who has made it clear he does not want to move to the right side of the line. The team could try to trade Albert to a team that is desperate for a good left tackle, or convince him to move to right tackle or guard. The Chiefs also could keep Albert at left tackle and use Joeckel or Fisher on the right side of the line.