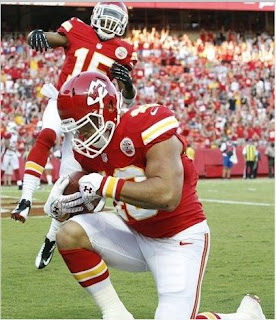 Football is back, and the Chiefs got their preseason schedule off to a great start with a 27-17 win over the Arizona Cardinals. Kansas City scored touchdowns twice in the first quarter, using a balanced attack to put the Cardinals away early.

The biggest thing Chiefs fans can take away from this game is that Jamaal Charles, Eric Berry and Tony Moeaki all played and looked like their old selves. The team lost this trio to injuries last year, which was a big part in Kansas City’s failure to reach the postseason. Charles took a hit to his surgically-repaired knee on the first play of the game, but appeared fine as he rushed for 12 yards on three carries.

Offensively, the team’s first-string offense looked very good in the first quarter. Kansas City got a huge boost from new running back Peyton Hillis, who broke a long run and continuously found good yardage on his inside runs. Hillis also scored the game’s first touchdown, catching a wheel-route pass from Matt Cassel for an 11 yard touchdown. It appears the Hillis may be able to return to his 2010 form and provide a nice complement to Charles, while keeping the team's feature back fresh. The Chiefs’ offensive line looked great early on, opening up holes for Charles and Hillis while giving Cassel time to find receivers open downfield.

Defensively, Kansas City did not allow a touchdown until after halftime and made a few big plays as well. Newly-signed safety Abram Elam intercepted Arizona’s John Skelton and returned it 37 yards, which lead to a Ryan Succop field goal. The Chiefs also got points following a great special teams play, as rookie Devon Wylie had a long punt return to set up another short Succop kick.

The team has struggled mightily in the past during preseason play, which led to a lot of criticism from the media and fans of former head coach Todd Haley. It was refreshing to see the team look sharp early-on in this one and defeat a weak team at home.