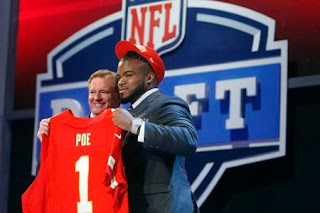 The 2012 NFL Draft is over, and the Kansas City Chiefs have added eight new players to its roster. Most draft experts have pegged the Chiefs draft as below-average, and ESPN draft guru Mel Kiper Jr. gave Kansas City a C+ grade overall. Despite the pessimism, the Chiefs have added several players who could start as early as next season and addressed several areas of need.

Most of the criticism Kansas City is facing revolves around the Chiefs first round selection of DT Dontari Poe. While he was a workout freak at the combine, Poe did not have much of a career at Memphis, which plays in Conference USA. The Chiefs needed help at NT, but many feel that Poe was a reach and that the Chiefs may have once again whiffed on a defensive line draft pick. Poe certainly has all the physical tools to succeed in the NFL, and the criticism leveled at Scott Pioli may be a bit premature.

The Chiefs needed to add depth to the offensive line, which is precisely what Kansas City did with its second and third round picks. Jeff Allen appears to be a very strong candidate to start next season, and could hold down a guard spot on the Chiefs’ offensive line for the next decade. Kansas City nabbed Oklahoma’s Donald Stephenson in the third, who could develop into a starting tackle in the future while providing some much-needed depth and youth at the position in the meantime.

Allen and Stephenson were not the only additions the Chiefs made to their offense via the draft. Kansas City added WR Devon Wylie in the fourth round, RB Cyrus Gray in the sixth round, and WR Junior Hemingway in the seventh. Wylie projects to be a useful slot WR, while Gray will add depth to a RB rotation that has seen its share of injuries over the past couple of seasons.

Apart from Poe, the Chiefs also added some depth to its defense in the later rounds of the draft. Alabama CB De’Quan Menzie was drafted in the fifth round, while San Diego State DT Jerome Long was drafted in the seventh. Menzie may be a step too slow to play CB at the NFL level, but has great instincts, and could be a candidate to move to safety. Long should push Poe and the rest of Kansas City’s underachieving defensive line.