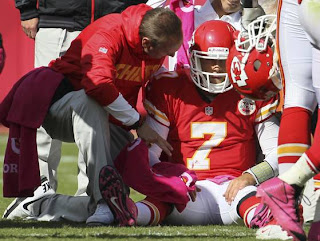 The biggest story emerging from the Chiefs heartbreaking 9-6 loss to the Baltimore Ravens isn’t that the team had a chance to stay to knock off one of the best teams in the conference, or that Kansas City’s defense played a fantastic game. Instead, Eric Winston has grabbed all the headlines with his criticism of Chiefs fans and their behavior during Sunday’s game. Winston ripped into Kansas City fans for cheering when quarterback Matt Cassel was injured.

Winston was quoted as saying the following after the game:

"We are athletes, okay? We are athletes. We are not gladiators. This is not the Roman Coliseum. People pay their hard-earned money when they come in here and I believe they can boo, they can cheer and they can do whatever they want, I believe that. We are lucky to play this game. People, it’s hard economic times, and they still pay the money to do this. But when somebody gets hurt, there are long lasting ramifications to the game we play, long lasting ramifications to the game we play. I’ve already kinda come to the understanding that I won’t live as long because I play this game and that’s okay, that’s a choice I’ve made and a choice all of us have made. But when you cheer, when you cheer somebody getting knocked out, I don’t care who it is, and it just so happened to be Matt Cassel — it’s sickening. It’s 100 percent sickening. I’ve been in some rough times on some rough teams, I’ve never been more embarrassed in my life to play football than in that moment right there.”

Winston was not the only player to criticize Kansas City fans for their behavior. Chiefs running back Jamaal Charles and the Ravens’ Haloti Ngata both expressed their displeasure with the situation through the media.

First, credit Winston for somewhat acknowledging the frustrations of the fans and that the people who attend games to watch his team play spend a lot of their time and money to do so. Fans invest a lot into their team, and Kansas City has one of the most passionate fan bases in America.

Having said that, Winston has a point. It is no secret that Matt Cassel has played extremely poor thus far, and fans have a right to criticize him and even boo him when he doesn’t play well. However, cheering when someone gets injured is crossing the line. It shows a lack of class and puts Kansas City in national headlines for all of the wrong reasons. Fans keep obsessing over Cassel being benched, and for whom? Brady Quinn, the guy who was a disaster in Cleveland and couldn’t beat out Tim Tebow in Denver? Ricky Stanzi, who during the preseason appeared to not even belong on an NFL roster? Cassel is the best quarterback on this team, which says more about Scott Pioli’s failure as a GM.

Chiefs fans need to direct their frustration in the appropriate direction. Cheering when a home player gets knocked unconscious is a classless move, and KC fans are better than that. This was Oakland Raider territory.

﻿
﻿Bob Fescoe, radio personality and host of Fescoe in the Morning is making headlines today after throwing a fit on-air regarding the Kansas City Chiefs. Fescoe’s frustrations have seemingly hit a high point after Kansas City got off to an 0-2 start this season while being outscored 75-41.

Fescoe’s frustrations are understandable, as the Chiefs have jumped out to an 0-2 start once again and haven’t even been competitive so far this season. However, the radio personality borders on ridiculous in his rant. Fescoe claims that Chiefs fans are embarrassing their mother, their father, the city, their wives and their children. What?

I’m all for sports rants, as they have given us some of the funniest sound clips you will find and provide YouTube gold. But Fescoe’s rant isn’t funny, and he just seems like a bitter fan. He claims people are tired of spending money on tickets, parking, and refreshments at the stadium. Well Bob, if you are sick of it, stop going. Chiefs fans pride themselves on being one of the “best” groups in the country and making Arrowhead stadium an intimidating place to play. If you want to carry that label, you can’t simply abandon your team when they play poorly after two games.

Fescoe also claims that the Chiefs give people nothing to live for. Really? I mean, seriously?

Maybe there is a much more reasonable argument to be made – Kansas City isn’t that good of a football team, and they have played one of the best teams in the league followed by a borderline playoff team on the road. Throw in that they were missing three key defenders in week one and play one of the toughest schedules in the NFL and an 0-2 start doesn’t seem that far-fetched.

Fescoe tries very hard to make his rant humorous. He claims he could have gone pumpkin shopping or drank cider in Louisburg rather than watch the Chiefs play – which again, isn’t funny. None of this is. This guy hosts a radio show?

It is quite clear what all of this is: an attempt to grab headlines and coverage. Fescoe is simply trying to get attention because the media will always eat up a juicy sports rant. Naturally, there are several articles in newspapers and online this morning about the rant with sound clips. Congrats Bob, you did it!

There is a reason I stopped listening to Kansas City sports radio years ago: it isn’t good. What initially put me off is that the hosts covering college sports all have clear agendas for their local team of choice. Jack Harry, of all people, gets to host a radio and television show – the same Jack Harry who picked the national runner-up and Big 12 champion Kansas Jayhawks to finish sixth in the league in basketball simply because he is a die-hard Mizzou fan. The same Jayhawks that have won the league eight years in a row. This guy has no clue what he is talking about 90% of the time and is a complete homer for one team, yet he is all over the airways. I’d rather watch paint dry than listen to this guy screaming on the air about nonsense.

People like Harry would rather stir the pot than actually analyze and objectively look at teams and matchups. It gets people talking and boosts ratings - but it isn't good radio. Not to me, at least.

Since I no longer listen to the local coverage, I had never heard of Bob Fescoe or his show. Judging by this rant, it looks like I’m not missing anything. Kansas City deserves better sports radio than this.