Eddie Kennison Will Retire as a Chief 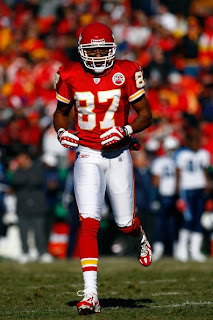 After failing to find a team who was interested in his services, Eddie Kennison signed with the Kansas City Chiefs. Rather than making one last comeback attempt, Kennison is signing with the team so he can retire as a Chief.
Kennison, a 13 year veteran, also played for the Rams, Bears, Broncos and Saints. Despite being a notorious journeyman, Kennison enjoyed considerable success for the Chiefs, and was a leading receiver on the Dick Vermeil coached teams that boasted one of the league's most feared offenses.
Given the nature of the NFL today, it is refreshing to see an athlete like Kennison make a heart-felt gesture towards a team and community that embraced him and gave him a second chance in the league. Hopefully other athletes will follow Kennison's lead and show appreciation to teams that gave them a chance or second chances to boost their own career.
Tickets for the up-coming season will go on sale July 28th for Jackson County residents and July 30th to the general public.
at 6:39 PM No comments: