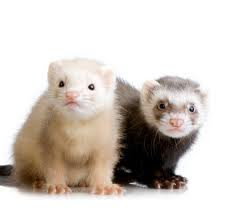 A 4 month old Grain Valley, MO infant is in critical condition after a pet ferret bit off 8 fingers early Monday. Only the child's thumbs and part of a pinkie remain. The parents awoke to the baby crying at 2:30 AM and found the ferret next to the baby. The child's father picked the ferret up and threw it, killing the animal.

The Grain Valley Police reported that the mother fell asleep in the same room as the child, and the father in another room and both were awoken in the middle of the night. in recent months, animal control authorities have made several visits to the residence to investigate complaints relating to dogs on the premises. The landlord at the address also said she told them to get rid of the ferret because it was in violation of their lease as they already had two dogs.

In any case, a ferret, or any animal around an infant unattended is a recipe for disaster. What a sad story for this kid, crippled for life because of his parents bad choice. Anyone interested in a Ferret as a pet should check out this helpful owner's manual I found - which by the way says children under 6 are not recommended for ferrets, and infants "are a particular problem. Some ferrets seem to be attracted to the high pitched cries of babies."
at 3:08 PM 1 comment: