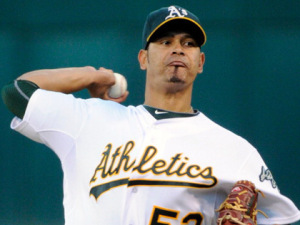 The Royals were busy yesterday making several roster moves, most notably the additions of right-handed pitcher Guillermo Moscoso and catcher Brett Hayes. Moscoso was claimed off of waivers from Rockies, while Hayes was acquired from the marlins.

It is unknown if Moscoso has been acquired to be a starter, although many feel he may get a shot. Last season with Colorado, Moscoso earned a 3-2 record with a 6.12 ERA in 23 appearances, including three starts. Moscoso had a much better year in 2011, when he went 8-10 with a solid 3.38 ERA in 21 starts with Oakland. The Royals recently traded for Ervin Santana, and have talented pitchers like Danny Duffy and Felipe Paulino returning from injury (both Duffy and Paulino were reinstated off the disabled list and are back on the roster). Moscoso would likely have to have a strong spring to earn a rotation spot, and may be headed to the Royals’ bullpen.

Hayes has spent the majority of his career as a backup, although he has seen some significant time in the major league. He appeared in 39 games last year, hitting .202, and played in 64 games in 2011, when he posted a .231 batting average.