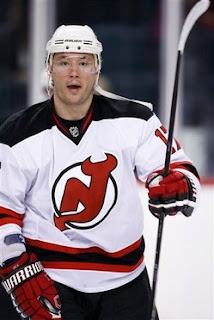 Ilya Kovalchuk plans on having a long and productive career in the NHL. The New Jersey Devils sure hope he does. The devils awarded Kovalchuk a staggering, 17 year long contract for $102 million. A deal of this length has never been thought of before in sports, much less made reality. The deal begs the question: are the Devils revolutionary? Setting a new trend in sports? Or just insane? Maybe it is a little of all three.
From Kovalchuk's point of view, the deal is a triumph. He has guaranteed longevity, doesn't have to worry about being shipped around (unless he becomes the second coming of Sidney Crosby, no team is going to absorb that contract) and will be paid over 10 million a year even when he is in his mid-30's.
The Devils do pay Kovalchuk a significantly less in the last several years of his contract, which would make a buyout easy should the team decide to cut ties with the player. However the Devils are taking a huge risk. Should Kovalchuk get hurt, play poor, defect to another country, etc the team will be taking a bigger hit than they could and should have. However, the Devils have gained a lot of attention from the press and fans, and excitement about the team has skyrocketed in the Jersey/New York area. It is one of the boldest front-office moves in sports history, now we will wait and see if Kovalchuk skates onto the ice in a Devil's uniform. At the age of 44.
at 7:10 PM No comments: