Lee Summit West High School’s Jamone A. Boyd, one of the top prep football players in the state of Missouri, was charged yesterday with armed robbery. Boyd is accused of robbing several victims at gunpoint in a Kansas City apartment. 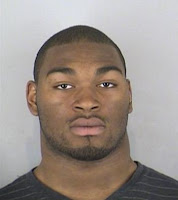 Court records depict that Boyd and several other men pushed their way into an apartment with five people inside, striking two victims in the head with a pistol while pushing others to the ground. The burglars stole cash, electronics and clothing, and warned the victims that if they attempted to leave the apartment after the robbery, they would be gunned down with assault rifles. The robbers also threatened to return and rob the victims again in a couple of weeks.


Boyd is being charged with five counts of robbery in the first-degree, as well as five counts of armed criminal action. Prosecutors have requested a bond of $150,000. Boyd has turned himself into police and has denied being involved in the robbery; however, four of the robbery victims have identified Boyd.


The football star, who is 6’4 and 250 pounds, has been rated a four-star defensive end and has received interest from all of the local Universities. Boyd was scheduled to sign a letter of intent tomorrow to play football at Butler Community College, deciding to improve his grades at the junior college after originally committing to Kansas State.


This hasn’t been Boyd’s first run-in with the law. In November, he was cited for possessing marijuana and resisting arrest. After this incident, Boyd was sent to Summit Ridge Academy. He was benched for one game last season at Lee’s Summit West after receiving a detention in school, which is a violation of team policy.  Lee’s Summit West head football coach Royce Boehm and district athletics director Darwin Rold have not yet commented on Boyd’s actions.