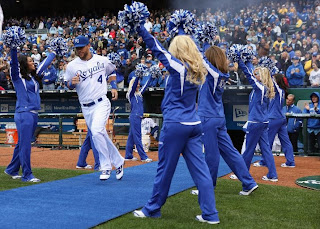 It may be a new season, but its the same old Royals. Kansas City dropped its home opener 4-2 to the visiting Los Angeles Angels, and fans have to wonder if the best record the Royals will post this season was yesterday's 0-0 mark.

Many pundits predicted that the Royals' offense would be among the worst in the majors this season, and yesterday's game did nothing to dispute these claims. Kansas City managed only two hits in seven innings against Jered Weaver. Luke Hochevar didn't pitch great, giving up 4 runs over 5 2/3rds innings, but the Royals' relief pitchers were solid. The problem in Kansas City continues to be offense.

The Royals did make it interesting late in the game, thanks to solo shots by Mike Aviles and Jeff Francoeur. In the ninth, Alex Gordon barely missed a home run with runners on the corners before striking out. It was a terrible day for Gordon, as he went 0-5 with three strikeouts. He continues to be yet another draft bust for a team that seems to have more than anyone else in the majors.

It is hard to take a lot from one game, especially given how long the MLB season is. Hopefully yesterday's effort was not a prediction of things to come, because it was all too familiar.