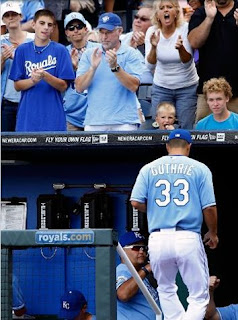 Jeremy Guthrie has been on fire lately, and that trend continued yesterday. Guthrie took a no-hitter into the seventh inning, and the Royals defeated the White Sox 5-2. The win gave Kansas City a sweep over their AL Central rival, and the team has been playing winning baseball over the past two weeks.

The hit that broke up Guthrie’s no-hitter attempt has been a controversial subject. Paul Konerko hit a ground ball that shortstop Alcides Escobar had to dive for. Escobar was able to make an accurate throw to first baseman Eric Hosmer, however the throw took a bounce that Hosmer was unable to field. It appeared the play should have been an error on Hosmer, however the official scorer Del Black decided that Escobar had to make too tough a play which resulted in an infield single. As a result, Guthrie didn’t even get a victory, as Chicago tacked on two runs later in the 8th inning. Luckily, Kansas City got some great hitting from Salvador Perez, who drove in runs in the 6th and 8th to twice give Kansas City the lead.

Dayton Moore has taken some heat this year, particularly for trading Melky Cabrera to the Giants for Jonathan Sanchez, who was a complete disaster for the Royals. However, he should be commended for trading Sanchez for Guthrie, who has been absolutely lights-out over his past several starts. Guthrie has likely earned a permanent spot in the Royals’ rotation, and could be part of the team’s future plans. With some key pitchers returning from injury next season, suddenly one of Kansas City’s biggest weaknesses – starting pitching – has a potentially bright future.

Kansas City’s sweep of Chicago improved the team’s record to 54-66 on the season, and the team will look to continue its winning ways when it travels to Tampa Bay for a three game series with the Rays. The first game starts tonight at 6:10 p.m., and Will Smith (4-4) will start for the Royals. Jeremy Hellickson (7-8) will be the starting pitcher for the Rays.