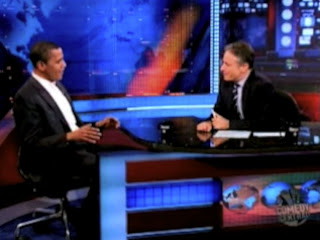 AskMen.com recently released its poll of the most influential men of 2010, with the Daily Show's Jon Stewart coming in first place. The surprising aspect of this list was that President Obama failed to crack the top 20, finishing at 21st. The poll rankings was determined from an average of users' scores and scores from the staff at AskMen.com.

Stewart has the advantage of being on TV five times a week, and is allowed to voice his true opinions on any matter he chooses. It is not surprising that Stewart finished first, and that fellow political funny man Stephen Colbert was ranked at 11. Obama's ranking comes as a huge surprise however, as he has been viewed as a polarizing figure in American culture since taking office. Perhaps Obama's influence was felt more by the average American when he was running for office and promising change, compared to now when he is in the full swing of his presidency.

Interestingly, Obama will be a guest on Stewart's Daily Show for the fifth time, and the first since he became president. The taping will occur three days before Stewart hosts a rally in Washington DC to help boost Democrat voter support. If these rankings are any indication, it will be Stewart, not Obama, who will help the Democrats gain some badly-needed momentum.
at 8:00 AM 1 comment: