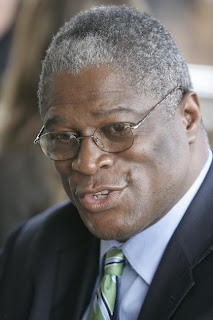 Kyle James, the 22 year-old son of Kansas City, Mo Mayor Sly James was handcuffed during an incident in Power and Light District on Saturday morning. According to the Police report, the young Mr James was causing a disturbance, using profanity, and annoying other customers at Fran's Restaurant around 4AM. The officer noted a strong odor of alcohol on Mr James and behavior that was consistent with being intoxicated. Kyle also refused to pay for his meal.

Apparently, this is not the first incident for Kyle James at this establishment. In the incident report, the officer, who works security at Fran's, stated that he had run ins with the subject on previous occasions. On Saturday however, he really got wound up. He pulled the ol' "do you know who I am" and told the officer he would have him fired the next day. Of course, he also pulled the race card.

While being escorted out of the restaurant, he was involved in a verbal altercation with three men waiting for a cab telling them he would "fuck them like that sweet sixth grade pussy on the playground" - WTF? He also stated that if they met him at 39th & Troost he would "fuck them up". I doubt Kyle hangs out much at 39th and Troost. Sounds like an idiot and a spoiled brat. He was not arrested, but probably should have been.
at 3:20 PM No comments: