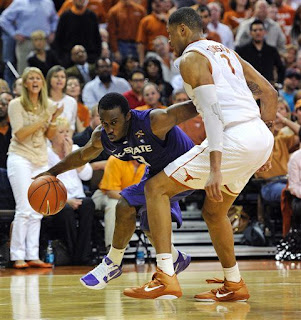 Kansas State wrapped up a spot in the NCAA Tournament and officially turned around its season with a 75-70 win over the Texas Longhorns. The Wildcats were left for dead after a 1-4 start to conference play, but have salvaged its once heralded season with an impressive five game winning streak. The win moves KState to 9-6 in league play, 21-9 overall and fourth in the Big 12 standings. Now the question isn't whether KState will make the NCAA tournament, but how good of a seed it can secure.

Texas has now lost three of its last four, watching its strangle hold on the Big 12 division evaporate into thin air in two short weeks. The Longhorns have a history of late season collapses under Rick Barnes, and it looks like once again a talented Texas team is struggling at the worst possible time. Also, I think it is now safe to say that KState officially owns Texas. Despite the Longhorns success in both football and basketball, it seems that every year the Wildcats upset them, at home or on the road. Forget Oklahoma and Texas A&M, its time for Texas fans to worry about KState, especially since the two teams will play more often in the new Big 12.

During the chaos that is the Big 12, Kansas has quietly continued to hammer inferior teams, despite various injuries and suspensions. When the smoke from the last two weeks cleared, it was the Jayhawks who once again found themselves on top of the Big 12 standings. KU has a tough remaining schedule, but a win tomorrow night against Texas A&M would give KU at least a share of its seventh consecutive Big 12 title. Seven in a row. How has this not gotten more media attention? If Duke or UNC had accomplished more than three, I guarantee ESPN would have a montage on it running before every college basketball game. Bill Self has his team in position to add to what has already been a rediculous decade for KU basketball, thanks to a little help from its in-state rival.
at 11:57 AM No comments: