Mizzou Rolls Over McNeese State, Washington Arrested Again
Take note Jayhawks, The Missouri Football knows how to handle a cupcake on it's schedule. Saturday evening in Columbia, the Tigers took apart the visiting Cowboys from McNeese State. The Tigers controlled this game from the opening kickoff - beating their Div 1-AA foe by a score of 50-6. The six points for McNeese were scored in the 4th Quarter when Head Coach Gary Pinkel had finally called off the dogs - I think the water boy and team managers were playing by this time.
Missouri also found a new running back to work into the rotation. True Freshman, Henry Josey had a break out game filling in for the injured Kendial Lawrence. On his first touch, he ran for 34 yards down the sideline. Josey ended the day with 112 yards on only 7 carries with 3 TDs. The Tigers now have three viable options at Running Back in Josey, Lawrence, and De'Vion Moore. Mizzou Quarterback Blaine Gabbert also had a field day completing his first 15 passes on his way to a 26 of 31 day for 220 yards and a TD. His completion percentage set a single game Tiger record. Former quarterback, T. J. Moe solidified himself as the team's leading receiver with another double digit reception game.
Meanwhile, former Missouri Team Captain, Derrick Washington was arrested again Sunday morning. He was taken into custody at his residence on suspicion of misdemeanor domestic assault. He posted $1000 bail and was released. It seems Coach Pinkel was absolutely correct in cutting this guy loose as soon as possible. It's a damn shame.

KU Football Program Dead at 120
The University of Kansas Football Program was found dead Saturday evening at Memorial Stadium in Lawrence. The KU faithful in the stands that night could only gasp in horror as North Dakota State bludgeoned a barely breathing program to death. Turner Gill turned himself in Tuesday morning to authorities who were seeking him on charges of accessory to murder. Also sought is Athletic Director, (Sweet) Lew Perkins, those familiar with the case claim Sweet Lew has fled the state. If convicted, Gill could be sentanced to up to 10 years as Mark Mangino's food tester.
Born in 1890, Kansas Football hasn't always been the laughing stock of the Big 12. Three NFL Hall of Famers have played at Kansas (John Riggins, Gale Sayers, and Mike McCormack). They even won an Orange Bowl. They amassed a 6-6 record in 12 Bowl Games alltime. Not too shabby for a basketball school. The Program will be missed by other Big 12 schools who would count on an easy victory every year, as well as by the few thousand who regularly attended KU Football games. When does Basketball Season start?
When reached by Kansas City News, Mark Mangino had no comment, but a huge smile on his face! 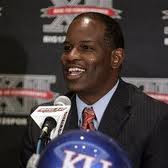 KU's loss to North Dakota State this past saturday at home in Lawrence was the most embarrassing in the program's history. After the program was elevated to never-before seen heights by winning the Orange Bowl and putting together back-to-back bowl seasons, Turner Gill has almost destroyed everything Mark Mangino built with one swift stroke.
At first I thought I was overreacting, but taking into account KU's opponent, I am confident that this is the lowest KU has ever sunk. North Dakota State is an FCS school, and not even a good one at that. The Bison went 3-8 last year, and lost key playmakers on offense and defense. KU couldn't even score one touchdown against this team? Not one? Absolutely pathetic.
I know KU lost some of the most prolific offensive players in the program's history, but the team still has talent. It has former high recruits all over the offense and every offensive lineman has starting experience. KU should have been able to play its scrubs and still beat this team by two touchdowns.
KU looked unprepared, unmotivated and downright helpless against "mighty" North Dakota State. Turner Gill inherited a team with young talent due to Mark Mangino's best recruiting classes ever before his departure. Gill needs to at least make progress this season and win a few games, or his tenure in Lawrence will be shorter than anyone ever could have guessed.
Comments?
at 7:24 PM No comments: