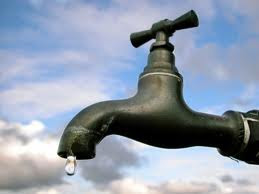 Kansas City Water Services Sneaks in Rate Increase
The Water Department started billing customers monthly last July. To some of you who have never lived in Kansas City, this may not seem unusual. But as long as anyone can remember, the KCMO Water Dept has billed every 2 months. Anyway, they effectively raised the service charge by almost seven dollars per month. I suspect they thought no one would notice. Well people did notice, and they're none too happy. Water officials claim that customers have been been asking for the change to make monthly budgeting easier. Monthly budgeting easier with an almost $7 increase in fees per month?
The Water Department claims that the increase is justified partially because of the increased cost to bill monthly. What? This is the same Water Department logic that has sleeping workers wait for hours for a concrete delivery. I am amazed (but shouldn't be) at the stupidity of this - government in action. Though rates in Kansas City are still very competitive, the fact that the increase was not communicated to the public shows that Water Services Director Terry Leeds is in over his head.
at 12:06 PM 4 comments: