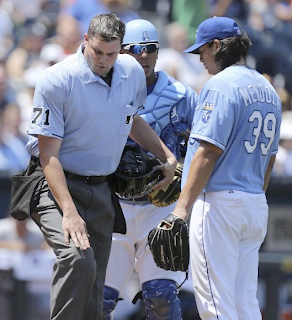 The 2012 MLB All Star game has come and gone, and the Royals kicked off the second half of the 2012 MLB season with a home series against the Chicago White Sox. Unfortunately, Kansas City dropped two of three in the series, falling to 38-49 for the season.

It was an up and down series for Kansas City, as the team first lost a 14 inning marathon Friday night before rallying for a 6-3 victory Saturday. In today's rubber match, the Royals faced one of the best pitchers in the league in Chris Sale, and could only muster a single run in a 2-1 loss. The poor offensive performance wasted a strong pitching effort from Luis Mendoza, who only allowed two runs and four hits in over seven innings of work.

While the series loss is disappointing, the team has a great opportunity to pick up some wins and get back into contention with its upcoming series. The Royals' next seven games are all at home, against the struggling Seattle Mariners and Minnesota Twins. The team hits the road for a three game series with the Angels before beginning another four game series with the Mariners in Seattle. If there was ever a stretch in the season in which the Royals could make a move, it is the next couple of weeks. We will see if the team can take advantage of the weak schedule or if Kansas City is once again heading towards a mediocre final record.